The following post has previously been published by Diana Mandache  in her weblog on the history of Romanian royalty. Banloc Manor from the Banat region in western Romania represents one of the many examples of grand period properties that once belonged to Romania’s royals and important aristocrats, which in the last decades suffered abuse and are now left to deteriorate, facing an uncertain future. However, there are also a number of positive examples that signal an encouraging trend and I mention here the Royal Savarsin Castle from the same region as Banloc, which is now back in the property of former King Michael of Romania. That estate is currently undergoing a thorough restoration, planned to function as a private residence and also as an ecofriendly hotel. Another example is Count Kálnoky’s castle in central Transylvania that is now a successful hospitality business and organic farm.

Princess Elisabeta of Romania, the former Queen of Greece, bought Banloc Manor in 1935 from the Karátsonyi family, local  Hungarian-Italian aristocrats, from the Banat region of Romania. Elisabeta restored and remodelled the manor, using it as a holiday residence for herself and other members of the royal family, among them King Michael of Romania and Helen, the Queen Mother. 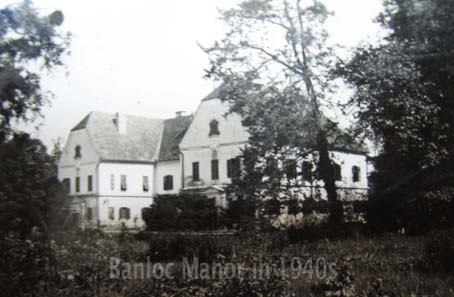 END_OF_DOCUMENT_TOKEN_TO_BE_REPLACED

Acquiring, restoring and owning a period property requires a great deal of intellectual work. One has to study and construct an entire imaginary map of the artistic/ architectural value of the building, its history and not in the least to attempt recreating the atmosphere and lifestyle associated with the house.

The cuisine specific to the country or the region where the property is located is the usually overlooked aspect in that effort. I believe that finding out how the locals cook or what kind of ingredients they use is an important aspect in successfully recreating the atmosphere and character of a period/ traditional house.

END_OF_DOCUMENT_TOKEN_TO_BE_REPLACED

The text bellow entitled “My Dream-Houses” was written by Queen Marie of Romania in the 1920s. Marie was Romania’s British Queen, a granddaughter of Queen Victoria, born and raised at Eastwell Manor, near Ashford, Kent. In the text she refers and describes with vivid imagination Romanian traditional houses and also her own country residences. The document thus represents an excellent insight by a most qualified witness into the ambiance of an epoch from when most of Romania’s period property stock dates. Narrative accounts like this are a great means to form a better image for anyone looking for a dream-house of their own in Romania.

(This post has initially been published in Diana Mandache’s weblog )

“To possess a home of her own is the dream of every woman’s life. No matter how small, how modest, but she wants it to be her very own, her nest, her refuge, her retreat. Even as a child, in imagination I was always building my home. I saw it in many shapes, for I was always a visionary. Beautiful pictures filled my soul, but I also wanted to create. Visions alone did not suffice me; I wanted to build, to realize, to accomplish. A sister, a year younger than myself, was my constant companion; with her I shared my dreams, and it was together with her that I built my first little dream-house. Absurd as it sounds, we built it out of a cast-away cupboard which an old family servant had obtained for us, I can’t remember how. We stood up this cupboard in a shady place among some bushes, added a thatched roof and painted a large heart upon its green door. The paint ran, so the heart became a bleeding heart, and in this narrow retreat we sat hand in hand dreaming. That was in my childhood.

END_OF_DOCUMENT_TOKEN_TO_BE_REPLACED

I would like to introduce you to a remarkable period property from south-eastern Romania, the Casota Conac that I am very familiar with since I grew up in that area. The description below is a brief introduction to one of the most prized types of countryside period property in Romania, the equivalent in this part of Europe of the English Manor of French country chateau.

END_OF_DOCUMENT_TOKEN_TO_BE_REPLACED

The Roman and Mongol empires at their greatest extent. Here is a good cultural geography illustration of an articulation point between civilisations: the place where I am based, indicated by the green arrow, called now Romania, which is at the hinge between the two geohistorical areas. This situation on the ground can well be observed and charted through the history of the local architecture, where there are influences from all over Europe, Mediterranean, Middle East, Persia, India and further afield. I like the thought that once, what is now Romania and parts of Vietnam were encompassed within same polity, the Mongol Empire. #geohistory #geopolitics #casedeepoca #valentinmandache
The evolution of the economic prosperity and purchasing power in Romania seen in the size and accoutrements of Neo-Romanian style houses. On the left hand side is a small national style house from the 1910s (built on an extended footprint of a previous wagon type Little Paris house), when the economy was based on grain production and exports, and very little industry, while the one on right, much ampler, better designed and provided with decorations and modern mod-cons, is built in the 1930s, when the economy was based on oil production and exports (one of the largest producers in the world then), agriculture as well as industry and a large internal market. What a # difference twenty years of evolution can make, much faster than nowadays! Cotroceni quarter, Bucharest. #neoromanian #economichistory #cotroceni #bucharest #balkans #southeasteurope #casedeepoca #valentinmandache
A problem of style diagnosis for some of the 1900-1916 built houses of Bucharest. That is the era of the early Neo-Romanian, when the national style was still finding its coordinates and the previous Ottoman architecture was still echoing powerfully in the new designs, but it was also a period of Orientalist fashions in visual arts. In my opinion those houses difficult to diagnose, such as the examples presented here, are an overlap, mix, convergence between the early Neo-Romanian and Orientalism. One of the main promoters of the design was the architect Ioan N Socolescu. #stylediagnosis #neoromanian #orientalism #bucharest #1900s #balkans #southeasteurope #casedeepoca #valentinmandache
Imaginative adaptation of a Diocletian window into a Neo-Romanian style one, of a 1930s built house in Romana area of Bucharest. Today there would be impossible to make such an artefact in Romania: the symbolism knowledge and technological knowhow are lost after communism and post-communism, there is a complete lack of imagination characterising the “designers” (so-called architects), and there are not craftsmen around, an intellectual desert. #neoromanian #diocletianwindow #bucharest #1930s #balkans #southeasteurope #casedeepoca #valentinmandache
Encounter with a hungry lame street cat during an architectural history fieldwork foray in one of the rundown areas of central Bucharest. #cat #cats #bucharest #balkans #southeasteurope #casedeepoca #valentinmandache
A good example of late Neo-Romanian style design, a phase of the national style architecture of Romania in the 1930s and 40s, which purged itself of the Ottoman heritage decorative elements and symbolism of the previous decades/ phases and over-emphasised the Byzantine Imperial heritage in a modern, confident, Art Deco cast, in tone with the politics of the national identity of Fascist Romania of that period. This doorway in Bucharest, Dacia area, would have sported a keel arch of Ottoman/ Moldovan Gothic inspiration, decorated with tulip motifs, but now it became a triumphal Byzantine, rose decorated arch. This is one of the characteristics and aesthetics problems of the Neo-Romanian style, namely that is less art and architecture and more politics of identity. In fact if one goes in a Bucharest tour (with yours truly, of course), can easily chart the rise of the right wing politics of Romania just by looking at the evolution of architecture, especially of the national style. #neoromanian #doorway #politics #nationalidentity #1930s #bucharest #balkans #southeasteurope #casedeepoca #valentinmandache
An interesting 18th c architecture (1780, from the reign of Maria Theresa), which prefigures the Neo-Romanian of more than a century later, in the Cross of Captain Ilie Birt in Schei quarter of Brasov/ Kronstadt, Saxon Transylvania. Birt was a colourful personage of the 18th c Romanian community of Brasov, anchored in both the Habsburg Empire’s and Ottoman Wallachia’s establishments, a man of both frontiers. The cross combines in a vernacular way the Baroque of Austria with the Ottoman Baroque of Wallachia, thus making it inadvertently an avant-la-lettre Neo-Romanian style monument. #iliebirt #cross #brasov #schei #kronstadt #saxontransylvania #transylvania #baroque #ottomanbaroque #neoromanian #southeasteurope #balkans #casedeepoca #valentinmandache
Interesting late Neo-Romanian style portal, from the 1930s, of the Andrei Muresan high school in Brasov/ Kronstadt, which combines the Wallachian/ Byzantine heritage of the Romanian communities with the Gothic one of the Transylvanian Saxons, a metaphor of the multi-culturalism of Transylvania. #transylvania #brasov #kronstadt #saxontransylvania #neoromanian #schei #southeasteurope #multiculturalism #casedeepoca #valentinmandache
Dove, parakeet screeches in the courtyard of Seville Cathedral, the former mosque’ ablution fountain yard. #sevillestudytrip #casedeepoca #valentinmandache