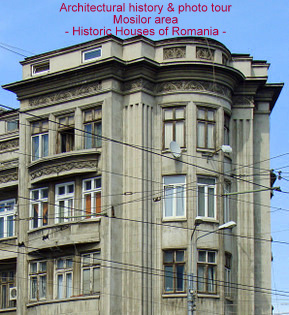 This is an invitation to an architectural walking tour in Mosilor area of Bucharest, open to all of you who would like to accompany me, the author of the Historic Houses of Romania blog, Sunday 30 August 2020, for two hours, between 11.30h – 13.30h.

I will be your guide through one of the most picturesque areas of historic Bucharest, that has known a spectacular development after the unification of the Principalities of Wallachia and Moldavia in the aftermath of the Crimean War. It is located on the road stemming from the old city toward Moldavia, known in the END_OF_DOCUMENT_TOKEN_TO_BE_REPLACED 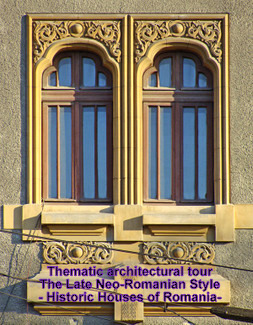 I would like to invite you to a thematic walking tour this Sunday 9 August 2020, on the subject of the late phase of the Neo-Romanian architectural style, which unfurled mainly in the fourth and the fifth decades of the c20th, a period when this order peculiar to Romania reached a crisis in terms of expression, mitigated by a fascinating synthesis with the Art Deco, Mediterranean and Modernist styles. The tour takes two hours, between 11.30h – 13.30h, and it may be of interest to those of you visiting the city as a tourist or on business, looking to find out more about its enchanting historic architecture and identity.

The modern construction technologies that emerged in the roaring twenties affording the development of light, airy structures expressed in the Art Deco and Modernist architecture, were quite antithetical to the traditionally ornate, heavy-built Neo-Romanian style edifices, as END_OF_DOCUMENT_TOKEN_TO_BE_REPLACED 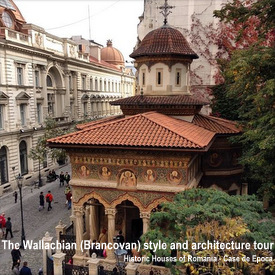 I would like to invite you to a walking tour on the subject of the unique to Romania, Wallachian architecture, also known as Brancovan, an enthralling artistic current of fusion between local Byzantine traditions, Islamic ones of the Ottoman Empire, together with European Renaissance and Baroque elements, an expression of this land being at the juncture of the European and the Oriental civilisations. It emerged in the Principality of Wallachia, chiefly in the 18th century, in an age of stability and prosperity for this frontier province of the Sublime Porte. Bucharest became firmly established as its capital in that period, and, as a result, is endowed with a great assembly of architectural monuments displaying this singular style.

The tour is scheduled to take place on Saturday 1 February 2020, between 11.30h – 13.30h. This cultural excursion could be of interest to any of you visiting Romania’s capital as a tourist or on business, looking to understand the character of this metropolis, through discovering its peculiar and fascinating old architecture, and the social and economic processes underlying it.

Although Bucharest is now a national capital within the European Union, linked primarily with Central and Western Europe, for most of its history, until the last quarter of the 19th century, the town was part of the Ottoman world, of the same mighty empire as Mecca, Damascus, Baghdad, Cairo or Tunis. That will give you a perspective of the enormous influence of the Turkish sultanate in this corner of Europe. Add to those geopolitical and cultural coordinates, the remarkable situation of Wallachia, together with neighbouring Moldavia, as the only Christian protectorates of the END_OF_DOCUMENT_TOKEN_TO_BE_REPLACED