The early Neoromanian architecture as seen in Gradina Icoanei area of Bucharest.

I would like to invite you to a walking architectural tour on Saturday 29 February 2020, between the hours 11.30h – 13.30h, in Gradina Icoanei area, on the theme of the exceedingly important for this country’s heritage Neo-Romanian architectural style, in its early phase, how this design peculiar to Romania has been initiated and defined, a period of cultural upheavals and economic prosperity from the 1880s until the mid 1900s. This cultural excursion may be of interest to any of you visiting the town as a tourist or on business looking to find out more about its fascinating historic architecture and identity.

The Neoromanian architectural style is the most visible and amplest body of heritage that this country has bestowed on the world’s culture. Gradina Icoanei area of Bucharest has the highest concentration of buildings featuring this architectural design in its inaugural stages, what I term as the early phase of Romania’s national architecture. The style was initiated by the architect Ion Mincu in 1886 with the Lahovary House, an edifice viewed at  this tour, continued with a series of END_OF_DOCUMENT_TOKEN_TO_BE_REPLACED

I would like to propose you an architectural history tour, in the western part of the picturesque Cotroceni quarter, which contains the grandiose edifices of the Medical Sciences University and the Palace of the President of Romania. The tour completes my series of distinct walks (east, central and west) covering this architecturally valuable area of Bucharest.

The event is scheduled to take place this Saturday 22 February 2020, between 11.30h – 13.30h. This cultural excursion could be of interest to any of you visiting Romania’s capital as a tourist or on business, looking to understand the character of this metropolis through discovering its peculiar and fascinating old architecture.

The most beautiful baroque revival style palace of Bucharest is the Medical Sciences University, the best such school in southeast Europe, designed by the Swiss architect Louis Blanc, and built in 1902, which is at the centre of west Cotroceni. Its aesthetics is auspiciously put into light by the the surrounding elegant built environment, one of the finest in the capital. You are thus going to sample, under my guidance, many of those examples, displaying a dazzling array of symbolism and messages, typical of the Neoromanian, the national architecture of this country, or the international Art Deco, Modernist and Mediterranean styles. The creators of many of those buildings were part of the golden generations of Romanian architects, people active mostly in END_OF_DOCUMENT_TOKEN_TO_BE_REPLACED 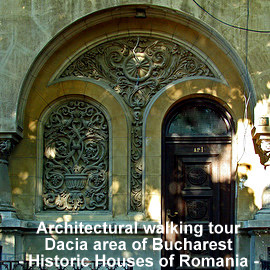 This is an invitation to an architectural history walking tour in the area centred on Dacia – Eminescu and Polona streets of Bucharest, endowed with some of the best quality historic architecture of Romania’s capital, open to all of you who would like to accompany me, the author of the Historic Houses of Romania blog on Saturday 15 February 2020 between 11.30h – 13.30h.

I will be your guide in this distinguished Bucharest quarter, packed with impressive building designs, especially Neoromanian, belonging to its mature (such as the image on the left) and late flamboyant phases, along with Art Deco and Modernist designs. Dacia also encompasses Little Paris and a multitude of mixed style buildings of a powerful personality. The architects of many of these END_OF_DOCUMENT_TOKEN_TO_BE_REPLACED 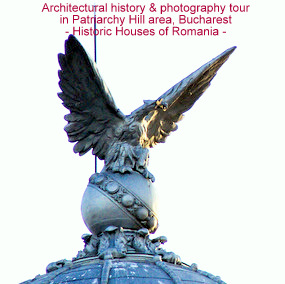 I would like to invite you, as the author of Historic Houses of Romania – Case de Epoca blog, to an architectural history tour in Patriarchal See Hill area of Bucharest, scheduled to take place this Saturday 8 February 2020, between 11.30h and 13.30h. This cultural excursion is open to all of you who are looking to find out more about the history and identity of Romania’s capital seen through its architectural heritage.

We will explore the urban expanse surrounding what is considered the “Acropolis” of Bucharest, the hill that dominates the old town and is the seat of the Romanian Orthodox Church, the main faith of this country, containing the patriarchal cathedral together with its administrative quarters, reworked in the interwar period by the architect Gheorghe Simotta in neo-Brancovan and Neoromanian styles. The Patriarchal See Hill area also END_OF_DOCUMENT_TOKEN_TO_BE_REPLACED

I would like to invite you to an architecture history walk in one of the prestigious quarters of Bucharest, Cotroceni, its eastern, older, part, centred on the area between Dr. Nicolae Staicovici Street and Dr. Joseph Lister Street. This cultural excursion is open to all of you who would like to accompany me, the author of Historic Houses of Romania blog, for two hours, between 11.30h – 13.30h, on Sunday 5 January 2020.

I will be your guide through one of the best quality historic architecture areas of Romania’s capital, constituted from an array of exquisite Little Paris, Neoromanian, and Art Deco and Modernist style houses, intercalated with some alluring examples of Art Nouveau and Mediterranean. The eastern part of Cotroceni is also its oldest, containing one of the best preserved laid out property developments from the Fin de Siècle years. These edifices were built mainly by people belonging to the professional classes of Romania, especially medical doctors and army high echelon officers, of the La Belle Époque and interwar periods. They constructed their residences close by the former Royal Palace of Cotroceni, where the crown couple lived, today used as the Presidential Palace, and the END_OF_DOCUMENT_TOKEN_TO_BE_REPLACED 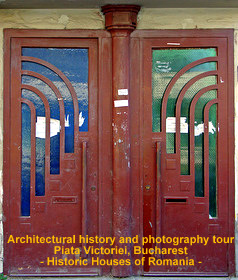 This is an invitation to an architectural history tour in Piata Victoriei area of Bucharest: open to all of you who would like to accompany me, the author of the Historic Houses of Romania blog, for two hours, between 11.30h – 13.30h, on Sunday 24 November 2019.

I will be your guide through a remarkably rich and architecturally varied area of central Bucharest, where famous public buildings often stand side by side with quaint Little Paris, Neo-Romanian or Art Deco and Modernist style private houses. The character of the local built landscape has been in large part determined by the architecture embellishing two important boulevards that cross the END_OF_DOCUMENT_TOKEN_TO_BE_REPLACED

I would like to invite you to a Historic Houses of Romania walking tour, in the area centered on Mathias Berthelot Street, just north of Cismigiu Park, which is a repository of some of the most representative period architecture imprinting the personality of Romania’s capital, akin to an open air museum of its built heritage.

The tour is scheduled to take place this Sunday 17 November 2019, between the hours 11.30h – 13.30h. This cultural excursion could be of interest to any of you visiting Romania’s capital as a tourist or on business, looking to understand the character of this metropolis through discovering its peculiar and fascinating old architecture.

Mathias Berthelot, whose name is given to the main street in the area, was a French general of the Great War era, who in 1916 became the commander of the Allied mission tasked with reorganising and equipping Romania’s Royal Army, thus enabling it to effectively oppose the Central Powers and hinder their plans to occupy the country. For his achievements he was made a honorary citizen of Romania and is considered a hero of both countries. The French influence is also prevalent in the architecture of Berthelot urban space, seen in an array containing quaint Little Paris style residences, displaying Art Nouveau decorations besides, palazzos, and the best of them all, the French Renaissance inspired Kretzulescu Palace, one of the town’s iconic buildings, erected in the early 1900, designed by arch. Petre Antonescu. The Radio Broadcasting House is another important edifice, built at the height of the Stalinist era, but designed during the previous, fascist, dictatorship, in Mussolinian style, by arch. Tiberiu Ricci. A local focal point is Luigi Cazzavillan Park, a picturesque green corner, landscaped in the manner of French and Italian parks of the La Belle Époque period, commemorating the Italian origin journalist with that name, who founded the first mass-circulation newspaper of Romania, Universul. Another focus is END_OF_DOCUMENT_TOKEN_TO_BE_REPLACED

This is an invitation to an architectural history tour in Dorobanti area of Bucharest: open to all of you who would like to accompany me, the author of the Historic Houses of Romania blog, this Saturday 16 November 2019, for two hours, between 11.30h – 14.00h.

I will be your guide through one of the architecturally most distinguished areas of Bucharest, in the same league with neighbouring Kiseleff in its END_OF_DOCUMENT_TOKEN_TO_BE_REPLACED

I will organise an architectural tour this Sunday 10 November 2019, between the hours 11.30h – 13.30h, on the subject of the mature phase of the Neo-Romanian architectural style, when it reached a peak in terms of expression and development. That represents an extraordinary creative period, unfurled throughout the first three decades of the c20th, which produced the most iconic and accomplished edifices in this manner of architectural design specific to Romania and neighbouring regions where the country had influence. The Neo-Romanian style had thus became the most visible identity marker of this nation and is now considered its chief contribution to the world’s built heritage. Bucharest is the best endowed place with edifices in that architecture, with a great selection of buildings from the period when the Neo-Romanian reach its magnificence. The tour may be of interest to any of you working as expatriates here or visiting the town, looking to find out more about its fascinating historic architecture and identity.

The mature phase of the Neo-Romanian style was initiated with the Great Royal Jubilee Exhibition of 1906 in Bucharest, when the pavilions of that venue were designed according to rigorous tenets, and the style was thus first properly and eloquently presented to the wider public of that epoch, and went on until the end of the third decade of the c20th, when it reached a certain crisis of expression under the impact of new, international, architectural fashions such as END_OF_DOCUMENT_TOKEN_TO_BE_REPLACED 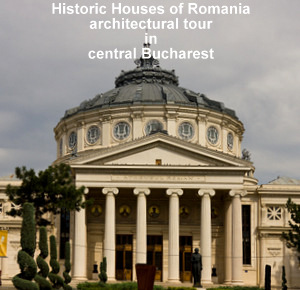 I would like to invite you to an architectural history tour to take place in central Bucharest, in the area around the former Royal Palace, which contains the Romanian Athenaeum, the symbol of this town and many other landmark buildings that imprint its personality. The tour is scheduled on Sunday 11 August 2019, for two hours, between 11.30h – 13.30h. This cultural excursion may be of interest to any of you visiting the city as a tourist or on business, looking to find out more about its fascinating historic architecture and identity.

Bucharest has had a number of central areas as it evolved from a medieval market town in what is now the Lipscani quarter, within a bend of the Dambovita river, afterward periodically shifting its location, following directions toward the main regional trading partners: to the south and east during the centuries of Ottoman domination, or to the north once the European powers had the upper hand in the region. What we call today the centre of Romania’s capital, the objective of our tour, emerged less than one and a half centuries ago, encompassing some of its most iconic historic architecture, from the Athenaeum, a magnificent concert hall in the Beaux Arts style, built in a first phase in 1888, designed by the French architect Albert Galleron, to the neoclassical outlines of the former Royal Palace (arch. N. Nenciulescu, 1937) that today hosts the END_OF_DOCUMENT_TOKEN_TO_BE_REPLACED